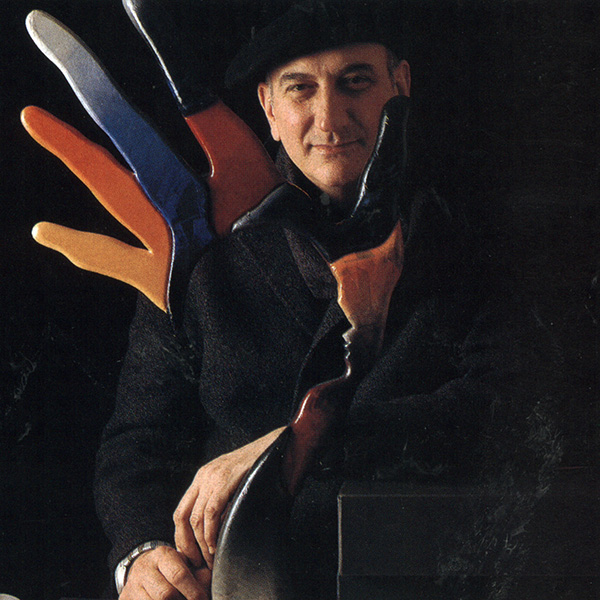 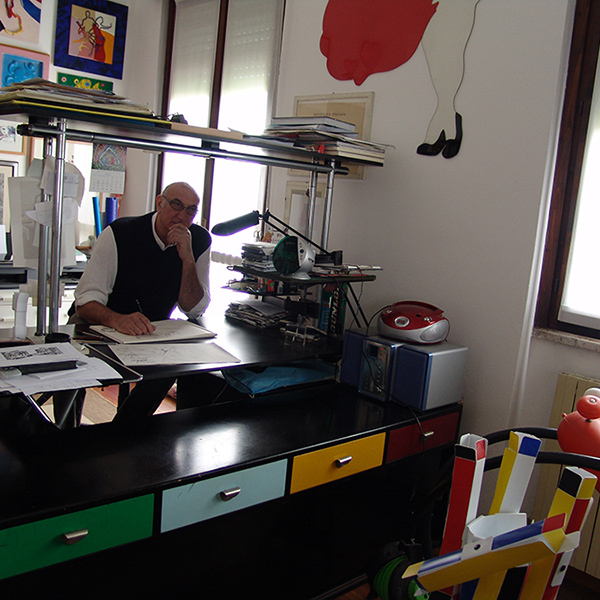 Dario Brevi was born in Limbiate (Monza e Brianza) in 1955, got a diploma from Brera Art School in 1972 and a degree in Architecture from the Polytechnic University of Milan. His artistic research starts in the Eighties and while he is developing his new-popular language (his first solo exhibition is at the Zum Mattheus Gallery in 1982), Milan is becoming the Italian capital of fashion, of commercial TV and night life. Brevi records all this in his works and turns those everyday life snapshots into art images. His wall picto-sculptures, built in moulded and brightly coloured chipboard mimic the longing for escapism of those very years, the trivialization of iconography, the prevailing of symbols and trends over ideas.

In his first solo exhibition in Milan, at the Diagramma/Luciano Inga-Pin Gallery, the ships, planes and rainbows on display draw on the standardized style of road or airport sign systems and seem to  head for or disappear into far and invisible horizons, as if prompted by a publicity driven collective desire. By his ironical outlook, everyday’s boring, commonplace or unpleasant objects (coffee cups,   shower boxes, smoking factories) are exploded in thousand shades and hues, become epic and meaningful, as it’s only proper according to pop tradition, and consistent with the notion of consumerism as the only source of pleasure.

He joins the art movement “Neo Futurism”, centered around the Diagramma/Luciano Inga-Pin Gallery, whose theoretical inspirer is Renato Barilli, art critic from Bologna. The main feature of this movement is a a strong urge to go back at “making art”, as opposed to the postulate of conceptual art, i.e. its outlook on art as a way of creating “artistic objects” by mainly resorting to the use of industrially manufactured materials.

In 1986, the art critic Luciano Caramel invites him to take part in the exhibition Dopo il concettuale (Past conceptual Art), at Palazzo delle Albere, Trento, aimed at reviewing the emerging trends of the Italian representational culture, on the wake of the great conceptual sway, which was still making its influence felt on the artistic languages and developments.

Later on, he takes part in the exhibition Effetto placebo (Placebo Effect) at the Murnik Gallery, in Milan and abroad. This marks the beginning of a collaboration with Andrea Murnik, who will display Brevi’s works on various occasions. Several art critics review his work, Renato Barilli in particular, who invites him to take part in exhibitions hosted by public institutions, such as, in 1991, Anninovanta (The Nineties), at the Galleria d’Arte Moderna in Bologna.

In 1992, he holds a solo exhibition at the Centro Steccata 2 Gallery, in Milan, where his big,  custom-made work Shangai (700 cm by 300 cm) is on display. This marks the beginning of a steady collaboration with this gallery, leading up to his work being exhibited on several art premises, such as the Levy Gallery, in Hamburg.

In 1995, he designs Ballatine’s Finest Scotch Whisky new packaging, an outstanding specimen of integration between an art object and marketing strategies. 1.500.000 copies of this metal gift packaging are produced, and to mark the event a book illustrating the project and a series of serigraphs are printed.

The cooperation with the firm Novamosaici F.lli Toniutti, Bollate, brings about mosaic objects such as mirrors, tables, tiles ecc. and several big sculptures, among which, in 2005, Splash (a coloured ceramic mosaic laid over a Fiat 500 car). A preview of this work takes place at the 2005 CERSAIE, in Bologna, where Brevi also designs the Aquae Musivae’s stand, and another one later on at the Miart, in Milan.

In 2006, for the Swatch World Museum, Brevi turns out his Una persona di polso, a medium density multiple work, each specimen hand painted and thus different from the others. Brevi’s work is perfectly attuned with the Swatch spirit, as, by means ot its colours, it conveys the message that joy, hope and playfulness are integral parts of life. The small sculpture, a hand displaying a human profile cutout, is presented to the public together with a sample of the Swatch latest collection.

In the course of the years, he starts cooperating with several other artists or musicians. His interest in music brings him into contact with several musicians and he strikes a deep friendship with some of them. A musical performance is a frequent feature at his solo exhibition openings.

In 2008 he meets Sergio Sgrilli, who, together with Francesco Gattuso, involves him in the project of a show beyond mere theatricals, aiming in fact at being a full-fledged event, as it starts first in the foyer with an enogastronomic prelude, art works on display, meetings with the artists, and goes on after the show itself, still on the same premises.

In 2009, together with the musician Franco Mussida, Brevi presents the installation Ad hoc at Step 09, in the East End Studios of Milan: while Franco Mussida’s voice and guitar build up an intense and evocative mood, Dario Brevi assembles a long trail of coloured fragments on the ground, creating a chaotically ordered path of light and colours. Made up of shapeless pieces at its beginning, towards its end, the trail turns out into butterflies, that swarm in the surrounding space and among the public.

That very year, at the opening of the exhibition Recent works at the Il Castello Gallery, in Milan, the percussionist Tullio de Piscopo gives a concert performance with the hang drum.

His first big sculpture of enameled wheathering steel, made in cooperation with the workshop F.lli Bogani, Limbiate, is dated 2010. It bears the title Farfalle (Butterflies), is 200 cm by 400 cm in size; it was set in Limbiate, Piazza della Repubblica, and unveiled on spring’s first day.

Still in 2010, Brevi turns out his work Stars, the trophy for the winner of the short movies festival started by Rutger Hauer, I’ve seen films, at the Palazzo Reale of Milan. The empty space just above the base of the sculptore outlines the dreamlike profile of a woman (the cinema), a single lock of hair down her cheek, the veil over her hair a star-studded sky, the biggest star calling Rutger Hauer’s Starfish Association logo to mind. Rutger himself asks him to create two other trophies for the 2011 edition. The works are consigned at the Museo del Novecento and at the Gaber Auditorium of the Pirelli skyscraper in Milan.

On the occasion of the centenary celebrations for the Primo Manifesto Futurista (First Futurist Manifest), Renato Barilli calls once again the public attention to the works of the Neo Futurism group. Thus, in the course of the International Meeting on Futurism and Avantgarde at the Palazzo Reale of Milan, he introduces the Neo Futurism group as the legitimate offspring of Balla and Depero and reviews their works on several occasions. In 2010, an exhibition of the group takes place at the Palazzo Bandera of Busto Arsizio, followed by another one at the Palazzo Guidobono of Tortona.

From November 2011 to February 2012, the Neo Futurists show their works at the Mart Casa d’Arte Futurista Depero of Rovereto. Renato Barilli and the museum manager, Nicoletta Boschieri, are in charge of the exhibition. They set it up inside the museum halls so that the group’s works interact with their masters’, creating new and intriguing connections.

In the summer of 2012, still Renato Barilli sets up the exhibition Nuovo Futursmo – Ridisegnare la città (Neo Futurism – Redesigning the city) at the Spazio Oberdan of Milan. In this instance too, in order to emphasize the direct lineage from the Futurist masters, their works are displayed side by side with Giacomo Balla’s, Fortunato Depero’s and also with design objects by Ettore Sottsass Jr. and Alessandro Mendini.

The Galleria Centro Steccata of Parma, interested in Brevi’s work since its beginning, has been following it for years, displaying it in solo or group exhibitions on the gallery premises and at the most important art fairs in Bologna, Milano, Torino, Verona, Padova, Parma, Bari, Bolzano, Pavia, Genova, Basilea, Parigi, Londra, Innsbuck.

He can praisen his curriculum solo and group exhibitions in Italy and abroad, at museum, private galleries and public areas.